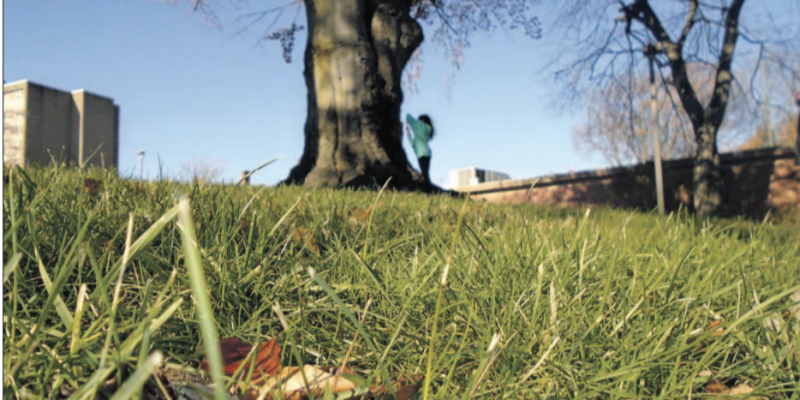 February 17, 2020 – What does peace look like to a child? The Mattatuck is exhibiting the culmination of its third year of the “Picturing Peace” program, an educational and artistic collaboration with magnet schools in Waterbury.

The partnership allowed students to explore peace and what it means to them by taking photographs and writing poetry.

In this year’s exhibition, on view through Feb. 28, fifth-grade students in Waterbury’s Maloney Magnet Elementary School and Rotella Interdistrict Magnet School art programs display their photographic visions of peace and wrote about how they drew on their social relationships and nature for inspiration.

“It gets them thinking about peace,” said Heather Whitehouse, education director at Mattatuck. “We want them to think about world peace, but we can’t take on world peace, so then we move into creating peace in yourself, in your home, family or in your community.”

Drs. Robert and Jill Beck developed “Picturing Peace” in the School of the Arts at the University of California, Irvine, as a healing response to the Columbine mass shooting and 9/11.

Organizers approached the education department at Mattatuck Museum during the 2017-2018 school year about bringing the program to Waterbury. “Picturing Peace” is an arts program that has now been conducted in 25 upper elementary school classrooms in the U.S. and Northern Ireland. Organizers say its goal is the development of peace-loving students and emerging peace-building citizens.

Whitehouse said the program begins with learning the basics of camera operation and care.Then the conversation enters into peace and students are supervised in off-site visits, where they explore images of peace. “They have a lot of friends they take picture with, holding hands and making peace signs,” Whitehouse said. ” They really come up with some very clever pictures and very clever stories.The photos are just so lovely. They did such a great job with their photos.”

The exhibit includes 40 pictures from students of both schools. As part of Mattatuck’s exhibition, students described how they translated words into pictures and how they expressed the feelings and values associated with peace as moral ideas. Their pictures and words instructed people on how they should act ideally if they are to keep the peace.

For instance, Nyasia Key, a fifth-grader at Rotella Interdistrict Magnet School, writes, “I took this image outside of the Mattatuck Museum as we studied the work of Andy Goldsworthy. This peaceful image reminds me of nature. When I go hiking I see birds, trees, grass and more, which makes me feel at home and reminds me of world peace. When I hear the animals together, it’s like music to my ears. It sounds so beautiful. When I look at the landscape, I’m in a peaceful state of mind. Without the trees and the wild, how would we survive?”

The teachers at Rotella and Maloney are particularly keen on the project, Whitehouse said. “The kids don’t get a chance to do photography in school,” Whitehouse said. “It’s critical thinking for the students, so we tie in all of that learning and the writing component. It ties into their curriculum and we take it a step further, in a little bit of thinking out of the box.”

Led by the Becks, the “Picturing Peace” program moved to Ireland in the aftermath of the 1998 Good Friday Accords. That agreement ended most of the violence of the political conflict known as the “Troubles,” which had beset Northern Ireland since the 1960s. In 2003, Northern Ireland officials invited “Picturing Peace” to assist in community-building. The photographs, produced by fourth-grade children and exhibited with the support of the lord mayor in Belfast City Hall, were viewed and celebrated by the Catholic and Protestant families who interacted and spoke for the first time in living memory.

Since 2017, the Mattatuck Museum has worked with students at Waterbury’s Maloney and Rotella schools in a seven-week program led by Museum teaching artists, both in the schools and at the museum. Students also work with their own teachers on descriptions of their work and thought process.

At this year’s exhibition opening on Jan. 14, students spoke about their experiences taking photographs and their feelings about peace. More than 100 teachers, family members and friends were present. “It’s just beautiful,” Whitehouse said. “The kids come to the opening reception. It’s a big hoopla for them.”

The program and accompanying exhibition are supported in part by the Becks.

The Mattatuck Museum is in the midst of a capital campaign to fund a renovation and expansion project for their building. Construction is scheduled to take about one year. During this time, the Museum has been housed at Rose Hill, a historic house located at 63 Prospect St. There, a portion of the Museum’s permanent collection is be on view, in addition to a special exhibit on the history of Rose Hill and the three families that lived there historically – the Chase, Welton and Scovill families. The museum is open Monday through Friday, noon to 5 p.m., and the first full weekend of the month, Saturday and Sunday, from noon to 5. Free parking is at Rose Hill and in the museum lot, which can be accessed through the Prospect Street gate on Park Place.